I come from a fairly small, exceptionally tight-knit family. A calling that has been passionately pursued by many of those in my family is that of military service.

My great-grandfather traveled all over the world as an ambassador of his country while providing for his family. He always brought my grandmother back a small token — a piece of jewelry, a charm — indigenous to the area he had just returned from. He passed away in the late ’90s of complications from Alzheimer’s, and while I was a young child at the time, I can still remember him telling stories of his time in the military, even when he was no longer capable of recalling my name or who I was.

My great-uncle learned invaluable skills through his time in the military, and as a result holds a prestigious job because of that knowledge. His eldest son, my second-cousin, followed in the footsteps laid out before him and also joined the military, using it as a vessel for his music and now plays in the U.S. Army band.

My aunt joined the National Guard right after graduating from high school, around the time I was born. She then transferred to the Army Reserves and retired after 26 years of service as a Sergeant First Class.

I have always had a great deal of pride in my aunt. It isn’t just because she served in the military for 26 years, but because she proudly did so in the face of adversity as a woman soldier. She proved herself to be just as strong, hard-working, and worthy as her male counterparts, and it is through her experiences that I find strength in myself in whatever I do.

Her military career is an inspiring story of perseverance and defying odds, and I could not be more proud of her and of the life she has had. 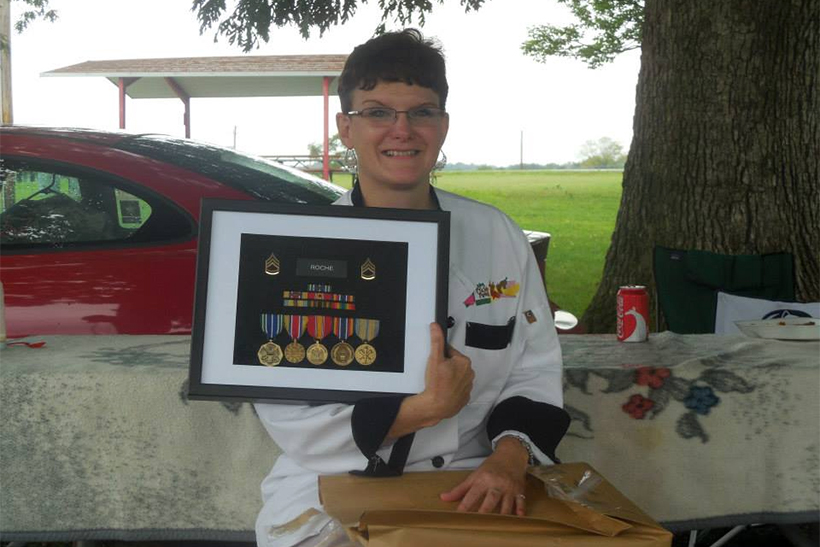 You don’t have to come from or be part of a military family to care about those who serve our country. Here are some simple things you can do to give back and say ‘thanks’ that will have a meaningful impact on active military, veterans, and those who love them most.

Almost exactly one year ago, it was reported that at least 40 United States Armed Forces veterans had died while waiting for care at the VA hospital located in Phoenix, Arizona. An investigation into the matter in June 2014 uncovered a harsh reality that veterans around the country were facing unrealistic wait times and unusual restrictions to their benefits. President Obama’s Deputy Chief of Staff reported on the situation saying that there were “significant and chronic system failures” and a “corrosive culture” inside the Veterans Health Administration.

While Congressional legislation was signed into effect in August 2014 by President Obama regarding VA funding and implementing reform within the Veterans Health Administration, there is still a lot to be done in order to truly support and lift up military servicepeople.

It is cruel to expect our military personnel to be there for us when we need them, to go to war if they are asked to do so, and to selflessly give their lives in the name of our freedom, and then deny them the benefits that they have earned once they can no longer deploy or serve as active duty.

When you hear of news regarding retiree benefits for veterans, ensuring that these men and women receive quality health care and have access to higher education in order to secure a civilian job once they are no longer active duty, educate yourself. Take a look at these initiatives and stand up in support of them. Call or write your local politicians and ask them to support initiatives on ensuring your community’s military and veterans are happy, healthy, and secure, sign a petition, and spread the word on social media.

Whenever me and my aunt go out anywhere — shopping, to the movies, out to a restaurant for lunch, anywhere — if she sees a military serviceperson in uniform or wearing a veteran jacket or cap, she approaches them to thank them for their service. It is a gesture that takes less than 30 seconds of your time, but means everything to someone who has dedicated their life, or part of their life, to serving their country, and serving you.

There are many military charities out there that have a direct impact on the quality of life of our military and veterans. These are just three of the charities making a difference:

There are many companies and brands out there who offer a little something to U.S. military and veterans, like discounts year-round and a free treat on days of significance, like the 4th of July, Memorial Day, and Veterans Day. I can’t tell you how many times a year my dad, a woodworker by trade, asks my aunt to accompany him to Lowe’s or Home Depot to gain access to her military discount, and our periodic shopping trips at Old Navy (also known as the only place with jeans that fit my unique shape) are always just a little bit cheaper. Direct Energy recently joined the ranks of thanking military personnel around the country by helping them save on their home energy needs.

Direct Energy is one of the largest retail providers of electricity, natural gas, and home services in North America. As a company committed to giving back to those who have given so much, they have recently launched the Direct Energy Military Portal, a dedicated space where active military and veterans can find discounted energy rates for their home energy needs.

To be eligible for the discounted military rates Direct Energy offers, you must enter your valid military ID into the Military Portal. Once it verifies, you will then be directed to a dedicated military plans page where you can view the plans available in your area.

Once you’re a Direct Energy customer, you will gain access to other time- and money-saving features, including the on-the-go Online Account Manager, on-time bill payment rewards program, and the Refer-a-Friend Program.

If you’re a U.S. military serviceperson, veteran, part of a military family, or know someone who is, spread the word about the newly-launched Direct Energy Military Portal where money is just waiting to be saved.

What do you do to say thanks to military service members and veterans?