I have heard nothing but phenomenal things about “Pacific Rim,” the sci-fi adventure movie starring Charlie Hunnam that was released in theaters in July. This action- and robot-packed film imparted a giant message to this audience — go big or go extinct.

Directed by Guillermo del Toro, “Pacific Rim” is an epic science fiction film set in the 2020s. Earth is at war with Kaijus; colossal monsters from an inter-dimensional gateway on the Pacific Ocean floor. Humanity unites to fight these huge monsters by creating the Jaegers: gigantic humanoid robots that are controlled by two pilots whose minds and memories are linked.

The story takes place in the later days of the war, following Raleigh Becket, a former Jaeger pilot called out of retirement and paired up with newbie pilot Mako Mori in a final effort to defeat the Kaijus! 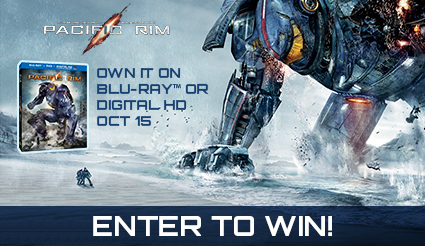 “Pacific Rim” will be released on DVD and Blu-ray October 15, but you can enter to win a copy right here! One lucky reader will win a copy of “Pacific Rim” on DVD/Blu-ray.

This giveaway is open to US and CAN entrants ages 18+ and will end October 27.

This giveaway was made possible by Warner Bros. and PartnersHub. No incentive was provided and opinions are my own.