Disclaimer: This post is intended solely for adult viewers. If you are under 18 years old (21 years old in some states), or are easily offended, please check out any of our other great posts intended for all ages.

I received a copy of Courtney Trouble’s “Seven Minutes in Heaven 2: Tender Hearted” for review. No other incentive was provided and opinions are my own. 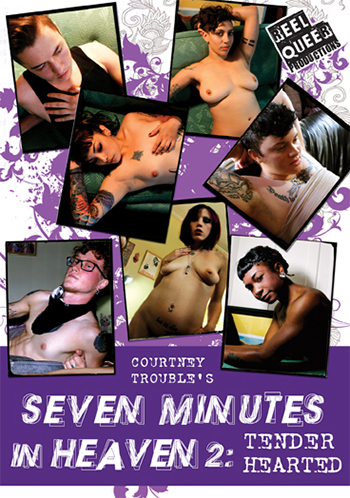 I don’t review adult films very often, but Babeland recently gave me the opportunity to review Courtney Trouble’s film, “Seven Minutes in Heaven 2: Tender Hearted,” and I jumped at the chance.

The set of “Seven Minutes in Heaven 2: Tender Hearted” is a fun slumber party where reserved etiquette gets thrown out the window. During a game of Spin the Bottle, once someone spins and, as we’ve learned from our earlier years, sees who they have to kiss, we not only see these actors kiss, but also get a taste of the very real chemistry between these people and see lust begin to take over as they devour each other.

The fact that the cast is predominately amateur only makes it hotter for me. If there is one thing that is completely obvious throughout the entire time you are watching this movie, it’s that these people are real. They are diverse in race, body type, and gender identity, exploring themselves and each other in a very authentic and natural way. Capitalizing on natural connections, everyone in “Seven Minutes in Heaven 2” chose who they wanted to appear with, and I think that made all the difference. In one scene in particular featuring Red, Cyd, and James, there is a refreshing playfulness that will actually make you smile and laugh along with them as Cyd and Red crack jokes back and forth.

Most of the scenes are incredibly enjoyable, but one in particular I cannot get out of my head, and not in a good way. The scene featuring Akira and Puck disappointed me so much that I could barely make it through the scene without wanting to press the fast-forward button. Akira, who I enjoyed in the first scene with Chocolate Chip, is just too much. Too much noise, really weird “O” face, just way too much for me to handle. I also found that every time Akira moaned for just a little too long, my arousal state decreased. Every single time. This is not good when it comes to watching porn for an “end result,” we’ll say.

But that did not turn me off of Puck Goodfellow. In fact, I am STILL reeling over the complete and utter sexiness of Puck Goodfellow. They have an undeniable sex appeal that you can only truly understand by watching them in action. The scene of Puck and Soma Stardust in a bathtub with Soma handcuffed to the faucet was my absolute favorite scene in the entire movie, hands down. I watched it repeatedly and I swear, it gets better with every viewing.

Another person I was undeniably attracted to was James Darling. He is just the cutest boy I have ever seen and I couldn’t take my eyes off of him. I would love to see more of him in action.

Even given the few slight issues I had with “Seven Minutes in Heaven 2,” I love this film. It delivered everything I was hoping it would, and then some.

While this is a review of a sequel, I have not seen the first “Seven Minutes in Heaven.” In fact, I was a Courtney Trouble virgin before receiving this DVD. With that said, I couldn’t be happier to add one of her films to my collection, and I can say that she has certainly made an enthusiast out of me.