I received a Crock-Pot Seasoning Mixes and slow cooker for review, as well as the opportunity to host this giveaway. No other incentive was provided and opinions are my own.

I will be the first to admit that I am not a great cook. Sure, I can make a meal and it will even be edible, but cooking has always been a source of stress for me. I second-guess everything and always convince myself that I am going to mess something up and everything will be ruined. I have a penchant for immediately jumping to the worst conclusion.

Despite years of trying and failing and trying and getting a bit better and failing and trying again, the reason why I am still not a proficient cook, I have deduced, is because I just don’t enjoy it. I made some pork chops once (yes, once) following a recipe from The Pioneer Woman. They came out well and I danced in the kitchen in celebration, but I give the credit to the step-by-step instructions I followed, complete with pictures of the entire process, while crossing my fingers for the best.

Needless to say, my dispassion for cooking coupled with the fact that cooking is in fact a necessity has led my Crock-Pot slow cooker to becoming my BFF in the kitchen. It is there for me, constantly assuring and reassuring me that there is no way that I can mess anything up bad enough that no one will be able to eat it. It makes me, the simple and not-so-great cook, feel like a rockstar, and that is liberating and awesome.

Crock-Pot Seasoning Mixes help make slow cooking even simpler, if you can imagine that, by expertly blending each packet for optimum performance in the unique temperature and moisture ranges of slow cookers. Last year, Crock-Pot Seasoning Mixes were available in three classic flavors — Savory Pot Roast, Hearty Beef Stew, and BBQ Pulled Pork. The success of these mixes has led to the recent release of three additional flavors to help busy families, or just simple, not-so-great cooks create even more slow cooked dinners — Original Chili, Beef Stroganoff, and Savory Herb Chicken, which I used just the other night to make a delicious dinner.

The ingredients: 1 package of 6 chicken breast fillets, as many honey gold potatoes that will fit in the bottom of your slow cooker (I got about 14 in my 6-qt slow cooker), 1 12oz bag of baby carrots, 3/4 cup of chicken broth, and 1 Savory Herb Chicken Crock-Pot Seasoning Mix.

First, throw your potatoes in the bottom of your slow cooker, followed by the bag of carrots. You should also put a sliced medium white onion in there, but I forgot that when I was at the store, and so I went without.

Then, layer your chicken breast fillets on top of your potatoes and carrots.

Mix 3/4 cup of chicken broth with the packet of Savory Herb Chicken Crock-Pot Seasoning Mix (the back of the seasoning mix packet says water, but do the chicken broth); pour over the chicken. Look at all those beautiful spices!

I let everything cook for 4 hours on high, but you could also set it for 8 hours on low.

Because apparently I was craving carbs and starch that night, I also made up some plain white Minute Rice, mixed with the excess liquid from the bottom of the slow cooker. 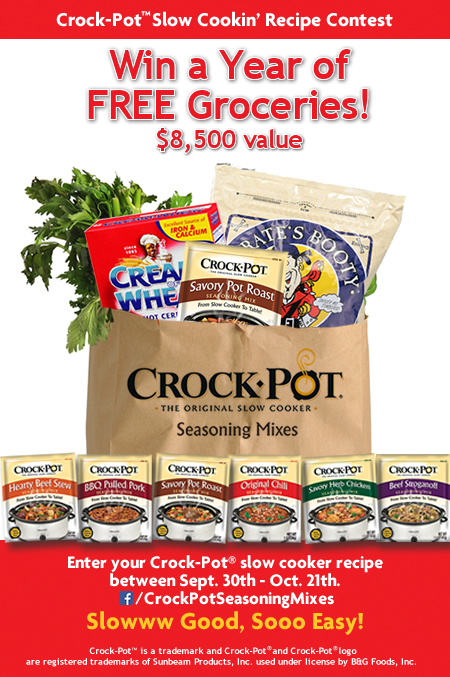 Last year, Crock-Pot Seasoning Mixes held their first-ever recipe contest with a huge grand prize for the slow cooker fanatic with the best recipe. The contest went over so well that they decided to bring it back for a second year.

From now until October 21, submit your favorite signature slow cooker recipe into the Crock-Pot Slow Cookin’ Recipe Contest. The grand prize winner will win a year of free groceries ($8,500 value), as well as a year’s supply of Crock-Pot Seasoning Mixes. The winner will also be featured in product and brand marketing efforts for Crock-Pot.

To submit your recipe, head over to Facebook.com/Crock-Pot Seasoning Mixes and click on ‘Enter to Win’ to submit your information, recipe, and recipe image.

I know that we have some slow cooker enthusiasts right here, so in addition to the Crock-Pot Slow Cookin’ Recipe Contest (which really, you should totally enter!) Crock-Pot has given us the opportunity to host an awesome giveaway of our own — and it revolves around your favorite slow cooker recipes.

This giveaway is open to US entrants ages 18+ and will end October 22.