Toy stores are one of the single most thrilling places for any kid, coming in second only to maybe candy stores. But there are some real issues stacked on each and every shelf of the world’s toy stores. Always segregated by gender, the designated boys’ section of toy stores offer up immeasurable inspiration for thinking outside the box and creating new things, either by invention or building or both. Girls, on the other hand, can choose from dolls (and their endless high gloss pink accessories), kitchen playsets, Easy Bake Ovens, and fairytale princess costumes.

GoldieBlox believes our girls deserve more, and unleashed an adorable mob of little girls for their commercial to celebrate the toy company’s disruption of the pink aisle.

GoldieBlox was founded last year after a successful Kickstarter campaign by Debbie Sterling, an engineer with an education from Stanford University. The idea for the line came to her after being troubled by how few women were working by her side. Engineering sits at the forefront of solving major challenges in our society; it offers a high salary and great job security, yet the field is dominated by men, who make up 89% of working engineers. That is a big problem.

Offering young girls a much-needed female engineer role model that makes engineering and problem solving fun and accessible, GoldieBlox aims to nurture a generation of girls who are more confident, courageous, and tech-savvy, giving them a real opportunity to grow and directly contribute to the progress being made in the world by engineers.

The first toy to be released in this exciting new line is GoldieBlox and the Spinning Machine, available now in toy stores across the country and Canada, almost like a beacon of light and hope emitting from the otherwise constant sea of pink. 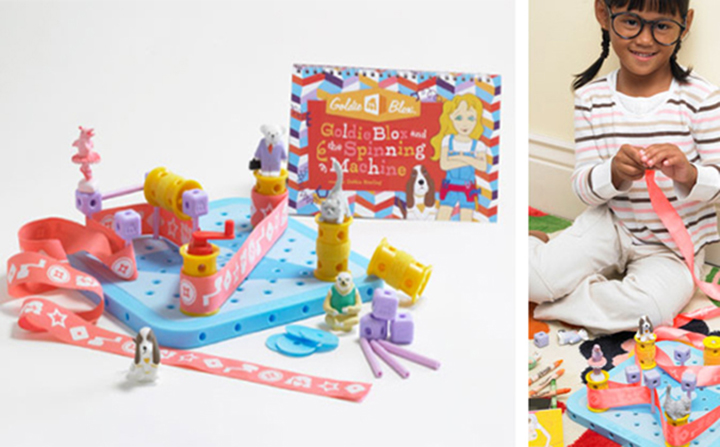 GoldieBlox and the Spinning Machine is the debut story of Goldie, the girl inventor who loves to build.

GoldieBlox has already been told that they cannot survive in mass stores next to Barbie, and that convention says engineering toys for girls are a “niche.” What a depressing outlook on the girls toy market today. That is precisely why it is so important to take on the responsibility of surrounding our girls with toys that will inspire them to believe that they can achieve great things, set out to do the so-called impossible, and do good in the world around them.