Early this month we became a 3-cat household, affirming the thoughts most of our friends and family have long had about my fiance and I being “cat people.”

This is our Sylvia.

She sleeps on pillows regardless of whether you had planned to rest your head on them. And if your head is taking up a pillow, she will squeeze her way around it.

She snuggles up to my fiance (whom she very quickly claimed as her primary human) for late-night video game playing. 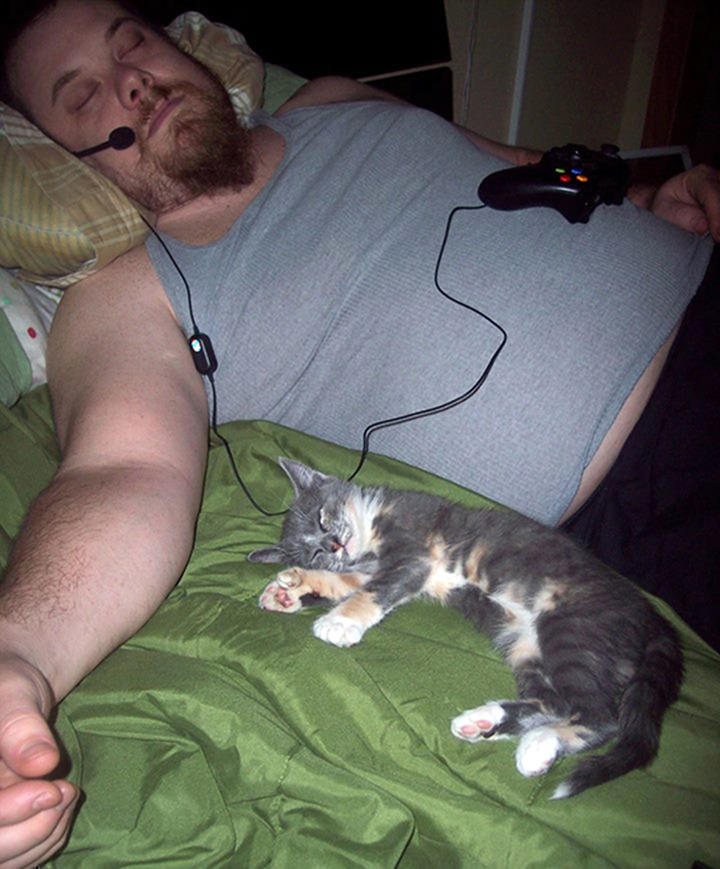 With her playful, go with the flow attitude, she was able to quickly win over the other two cats in the family.

My aunt has a friend whose cat had a small litter of three kittens. Another friend of hers was on the lookout for a new fur baby, ready to move on after the loss of her family’s cat. My aunt picked up this tiny kitten and brought her home for the night so that she could deliver her to her new forever home the next morning. Then a problem arose. Because of course. My aunt’s friend was only willing to take in a male, and the kitten my aunt had picked up was a female. But there was something truly special about this little girl. She is a polydactyl, so instead of having five toes on each paw, she has six.

Because my grandmother and I had been talking just a week before this all happened about Ernest Hemingway, his house that is now a museum in Key West, Florida, and his love for polydactyl cats, of which he had several and whose descendants still live on the very same property, she immediately called me.

The kitten could have easily been brought back to the home in which she came, since my aunt had to go back there anyway to pick up the male kitten for her friend, but after hearing that she was a polydactyl and seeing the unbelievably adorable pictures that my aunt had taken of her I just couldn’t let that happen. That same night my fiance and I went to pick her up and she became the newest addition to our little family.

She had me at polydactyl.

As with any new feline addition, it took a few days for our other two cats, Devin and Vincent, to begin to accept Sylvia’s presence in their home. I had expected more push-back from Devin, the alpha female of the house that keeps to herself and does her own thing. She isn’t a big fan of other cats, or people for that matter, but that doesn’t stop us from being big fans of her. She had quickly made sure Vincent knew who was boss when he joined the family, but surprisingly, most of the upset actually came from Vincent, my big baby who still insists on being carried around on my shoulder, who can lay in my lap for hours, and who frequently sleeps on my chest regardless of the fact that he is a good 15 pounds. I found out that he can be pretty jealous. Luckily, he got over that fairly quickly and he and Sylvia have become close buddies. Whenever I see Vincent walk into a room, I know that Sylvia isn’t too far behind. They play together for hours and when they’re done, they fall asleep, never too far away from each other.

Just under a month in, Sylvia has settled in with her new-found siblings and has made herself completely at home.

12 thoughts on “Meet Our Newest Addition, Sylvia the Polydactyl Kitten”