The subject of this week’s Monday Morning Tunes is a little different than most — and something tells me they would be pleased to hear that. Space is an English indie rock band who first gained major recognition in the mid-90s. While they have found a solid home within a genre I practically live in, and draw heavy inspiration from the eclectic sounds of 1960s and 70s rock that I grew up listening to and hold a deep appreciation for, there is something about Space’s peculiar sound that I do not typically go for. In fact, I almost didn’t even write this. So what changed my mind? You have to hear it to understand.

Space formed in 1993, and their history between then and now is as winding and electrifying as their front-and-center synthesizers. From 1993 until 2000, Space enjoyed a steady rise in prominence in the UK, as well as in the US when their hit single “Female of the Species” gained widespread airplay on college radio stations and on MTV back when MTV still predominantly played music. While they experienced shifts in the band’s lineup, they continued to tour and put out two albums before their record company Gut Records indefinitely delayed the release of their third.

After a 5-year moratorium, Space released the album “Suburban Rock ‘n’ Roll” under Randm Records in May 2004, but disbanded shortly thereafter in 2005. It wasn’t until 2009, when their former drummer passed away, that the remaining members of the band came together and began to sow the seeds of what would become of their musical endeavors together, once again.

Two years later in 2011 the big news hit that Space were back and the new lineup reunited original members of the band for the first time in 10 years. They were joined by three new members and cemented their return with a sold out reunion gig at the 02 Academy Liverpool in December.

Throughout 2012, Space performed at various venues and festivals while working on material for what would become the 2014 crowdfunded release of their first album in a decade — “Attack of the Mutant 50ft Kebab.”

As you can easily tell from just the titles of their albums, Space doesn’t seem to take themselves too seriously; or seriously at all. That was one of the reasons why my immediate inclination was to write them off. And then I listened to their 90s hit “Female of the Species,” which I hadn’t heard when it initially came to fame. To my surprise, I found myself humming the chorus to myself and listening to it again. I like it when a band can prove my initial judgments dead wrong. 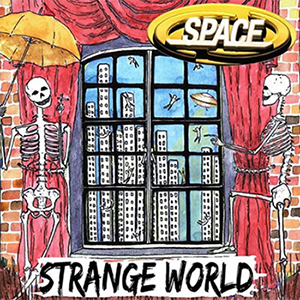 Known for their over-the-top, dark humored lyrics that frequently deal with subjects like failed relationships, social outcasts, serial killers, and mental illness, Space doesn’t seem to be straying from their lyrical roots with their catchy new single “Strange World.” Take a listen:

Space’s upcoming album by the same name will be released by Ocean Waves Productions October 19, 2015, and the band will also embark on an extensive UK tour. Get the dates below.

“Strange World” combines Space’s signature sound with a Mariachi vibe, creating a record that could serve as the soundtrack to a David Lynch film. This is Space at their finest, a record set to delight their army of fans as well as winning many more.