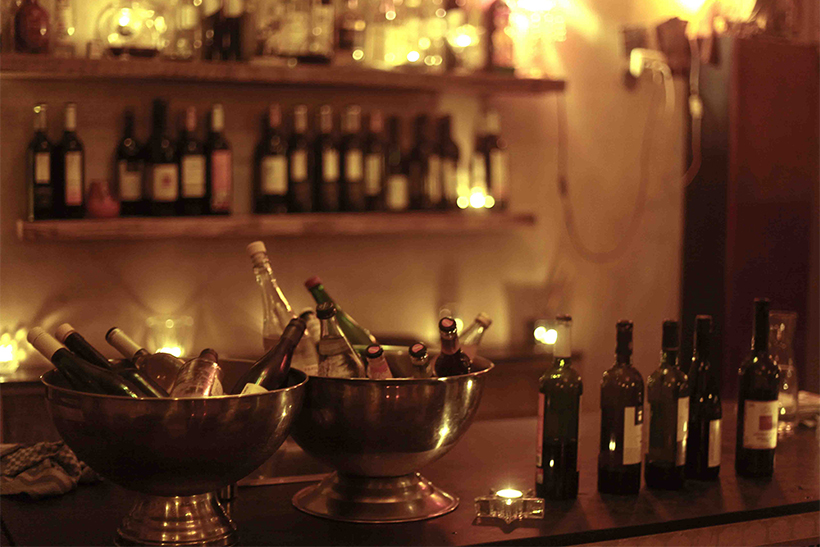 Jurgen Strumpf never used to think of himself as an entrepreneur. He didn’t even regard himself as a businessman. He was a wine seller who liked to invite his friends over to his shop for wine tastings and some food. He couldn’t bear to charge them full price, so instead he asked them to pay what they could afford. Very quickly, this concept of Pay What You Want became a Berlin institution.

Jurgen Strumpf owns two Pay What You Want wine bars in the city: The Forum and Perlin. With paintings by the owner on the walls and the kind of furniture you would find in a 1950’s German living room scattered throughout, both create a homey feeling unlike any other bar in the city. The main difference between them is their clientele. Perlin is popular with the locals and has only 40 seats, so you have to book in advance. The Forum is far bigger, catering to the tourists that flood in from the nearby hotels in Berlin, especially the Mitte district. The Forum is a lot rowdier than Perlin.

When you walk through the door from 8PM onward, you pay only two euros for a wine glass, which you can refill with as much red and white wine as your stomach and head can handle. The catch? At the end of your night you throw what you think you owe into a huge tip jar at the entrance.

In keeping with their laid back attitudes, neither bar has a set menu. The menu is usually decided on that day and one thing that’s for certain is that any food served will be fresh and organic. The wines, all brought in from a nearby weinerei, or wine shop, include Spanish Tempranillo and Bavarian prosecco. There’s also a popular house wine from Strumpf’s hometown of Franken.

Weinenfrei, like so much of Berlin, does not discriminate. Whether you are staying in an expensive Berlin hotel such as Das Stue or a budget Berlin hotel like Mark Apart, at Strumpf’s bars anyone can afford a quality night out and a true cultural experience.

6 thoughts on “Weinenfrei: Pay What You Want in Berlin”